7 Tips for Crafting a Compelling, Yet Informative Documentary Story

I’ve been doing a lot of work recently on a short, as well as feature length, documentary films in the last few years. One of the challenges I struggled with in almost every case was telling the story in a logical way that not only kept the viewer interested, but also just made sense to common viewer. Here are some tips on what I learned worked, as well as what didn’t.

1. Take the time to examine all facets of your story.

For a documentary, you likely have a topic, subject matter, or point you’re trying to make, with an ultimate end goal of having the viewer take action or at least walk away feeling informed. Whatever your thesis, it’s important to identify all components of that topic, as well as its subtopics or supporting concepts. I find it helpful to actually draw out a “mind-map” to get a better idea of the “big picture” when working on an in-depth project, BEFORE I start scheduling interview shoots or planning production. Here’s a visual for reference, one that I used when planning the scope of my “Ascending India” documentary film about rock climbing development in India. 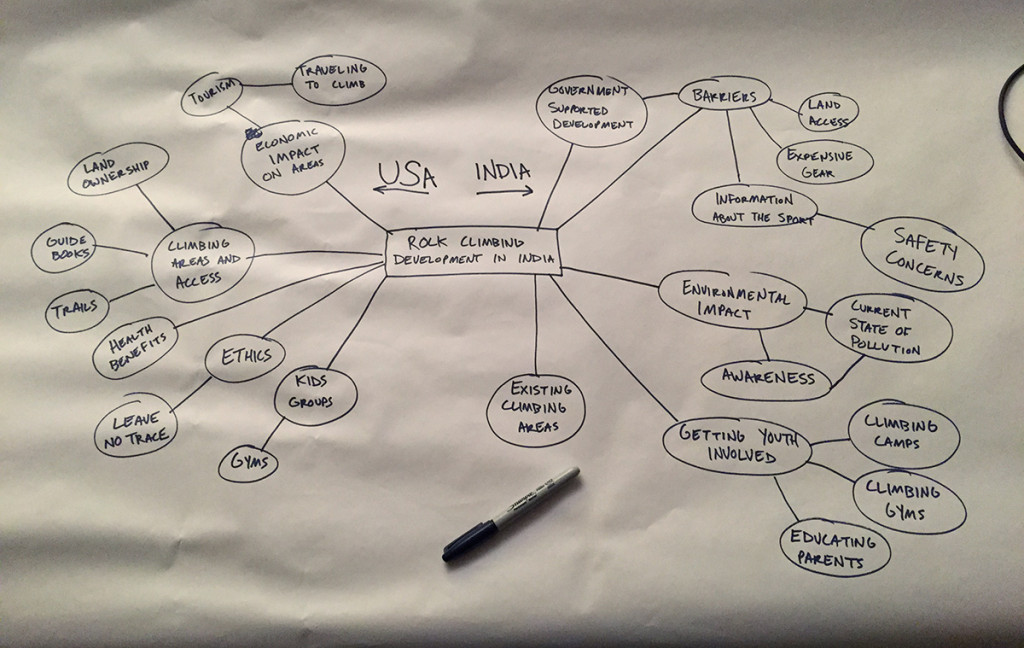 I knew that in my film I would have two separate sections; half of the film would take place in the USA, while the other half would be in India. Creating this mind map allowed me to expand on concepts and think about all kinds of supporting concepts for my primary story.

Out of all of the content your identified in step 1, it might be helpful to then rank it in terms of importance. This will become important later, as often times a documentary could be hours and hours long if all of the material was used, but sticking to the most important and compelling responses will help you focus your story without constantly repeating points. This will also help you craft the questions for step 3…

3. Create questions that will get you the audio bytes you need for your story.

With your mind-map created, use the ideas you discovered there to learn what the different angles of your documentary will focus on. When you know this material, it may be easier to create a list of questions for your interview subjects. Don’t forget that your audience might not be an expert on the subject matter, so coaching your interview subject to explain things in layman’s terms can be extremely helpful for communicating complex or foreign concepts.

Writing the right questions is pivotal for the success of your film– the answers you capture on camera will likely be the heart of your story, so I’d recommend being thorough. I sometimes even write down the answer I’m hoping to hear right next to my question, so that if the interview subject doesn’t deliver what I wanted, it’s easy to take notice and perhaps re-phrase the question or approach it in a different way.

When I was working on my documentary film, “Ascending India,” I had hours upon hours of interview content. The people I spoke with addressed many different topics, so I had to separate and group their responses by subject matter. I did this by simply creating sequences in my NLE that were labeled with the topic. After doing this for all of my interviews, I got a much better idea of what topics I had the most content for, and what topics I did not.

5. Putting it all together?

This was the hardest part for me as a storyteller, and results will likely be different for everyone because every project is unique. Here is what worked for me.

My story consisted of a lot of interviews that were there to educate viewers, but it also included a series of events that took place. I used these “events” to create a chronological backbone to the documentary, but the story would digress into different topics when there was an appropriate segue or visual tie-in. Like in step #1, I wrote things out to get a better understanding of the “bigger picture” of the project. This time though, I used 3”x5” cards, and on each card I wrote a discussion topic, event, or scene from the film. 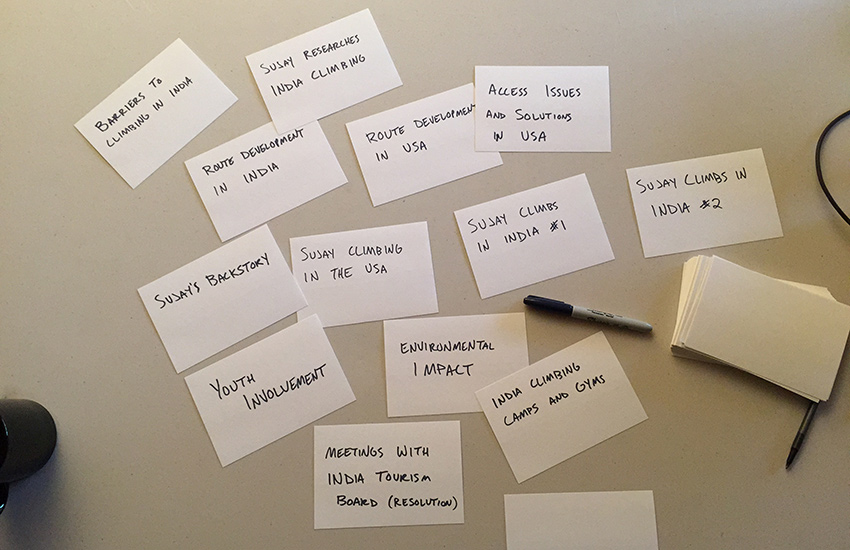 Having these cards out made it easy to see natural segues and associated content, but also equally disperse digressions so as to not bore the viewer. In my example above, I recreated the main points for this article, but when I really did this exercise a few years back (I didn’t take any photos then, d’oh!) I actually wrote cards out for additional plot points or conversational topics that my interview subjects addressed. Below is the sorted version of these cards. 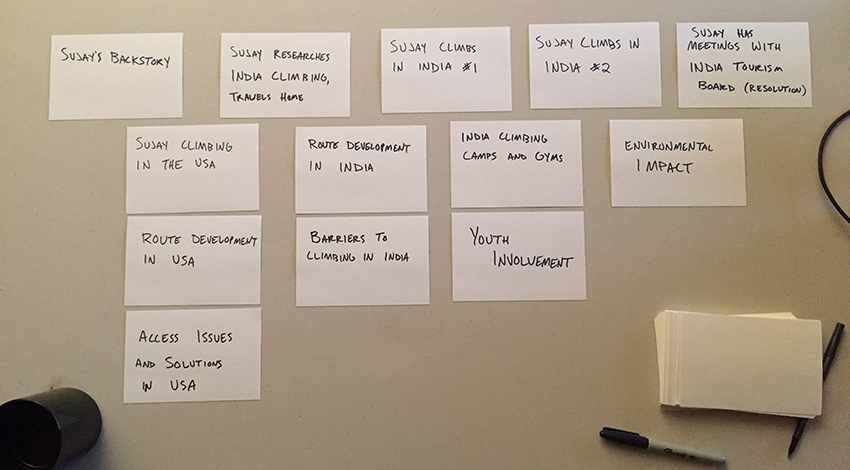 The top row going left to right are the major events that happened chronologically, and the columns that go down are the discussions and topics that would be edited in between those events.

It took me about 18 months to edit the finished 60-minute film. I arranged and re-arranged different scenes on many occasions, and tried to eliminate redundant thoughts whenever possible. I used the 3×5 card ordering as a place to start, but of course varied from it as I saw new connections or thought certain scenes just weren’t working. Here’s the trailer that might give you a taste of the content I had to work with.

I ultimately decided to use screens of text to create chapters in the film, with a simple chapter title setting the stage and establishing better context. Making sections to group content I felt broke up the film into smaller, bite-sized pieces and ultimately easier to follow.

It was only after I had shown many friends and gotten feedback from them, that I decided to use the chapter transitions as noted above. As the editor and director of a project, it’s impossible to have an unbiased, uninformed perspective. You must have people who weren’t on a shoot or simply not involved in the project in any way, look at your rough cuts. They will notice things that you have been glossing over since the start! It’s tough to go back and make changes, but that’s the beautiful thing about non-linear editing; you can save your existing sequence while working on a revised version to see if it flows better!

In case you’re curious, here’s what my timeline looked like for the 60-minute edit of Ascending India: (click to enlarge)

Mike Wilkinson is an award-winning multimedia director that operates his video production business Wilkinson Visual out of Lexington, Kentucky. Mike has been working in production for over 10 years as a shooter, editor, and production consultant, from directing documentaries overseas and editing feature length digital films, to shooting live sports and making travel photography. Mike has produced for and had work featured by many national and international media outlets, including Outside Magazine, Rock & Ice, Gizmodo, ESPN, TNT, Michigan Sports Television, The Big Ten Network, Roadrunner Records, and lots of Michigan-based ad agencies.