Readers’ Poll: What are the Elements of a Hit Feature Film?

There are so many great films out there, but determining the difference between a good, bad or great movie is difficult. Some believe the timeless classics will always trump the new releases, while others are interested in the innovation of modern pictures. On top of this, we can’t forget the relationship between casting, acting, writing, cinematography, special effects, and budget. Is there a formula we can use to predict if a feature film will become a hit? We’ve turned to you, our readers, for the answer.

Our survey below analyzes these elements and more to see if we can discover a causation behind the success of a film. The results will be used to develop a custom-designed infographic for the Winter 2016 “Motion Picture Issue” of Resource Magazine. Take a moment to fill in the answers—perhaps the results will give you a better understanding of what attracts you to a film, and maybe even the knowledge to go on to create the next hit motion picture.

Click here or on the image below to take the survey. 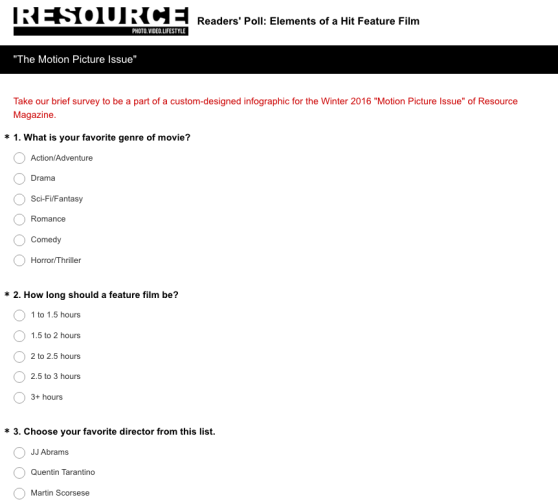